Salt: Friend or Foe?
How does salt affect your body? Doctors caution us about salt, but its effect on your health actually depends on your Body Constitution.

For a Yang constitution salt is medicine, strengthening the kidneys, cooling excessive stomach/spleen heat, and opening energy circulation. It grounds the energy and creates a sense of calm.
For a Yin constitution salt acts like a toxin, creating excessive coldness, dampness, and sluggish circulation, and it blocks energy flow, potentially causing symptoms such as edema, joint pain, anxiety, heart weakness, etc.

So it is essential to know your Body Constitution to know how salt affects your health.

Our Featured Client, below, describes the impact that salt has had on his Lesser Yin body. So let’s take a look at salt. 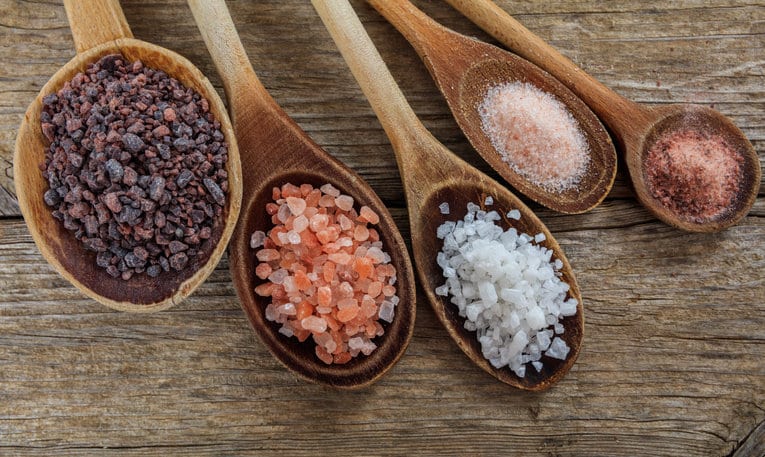 Salt is Water Energy
Its energetic character is extremely cold and wet. If you sprinkle it on vegetables it brings the water out of the vegetables. When we eat salt it enters our Kidney meridians, providing more cold, damp energy to the kidneys. Salt will also create a cold, wet climate for the Stomach/spleen.

For someone of a Yin constitution, the Stomach/spleen energy fundamentally has a cold, wet condition. By following your Lesser Yin diet you can create consistent warmth for your stomach, but it will always be very sensitive to anything you ingest that will add cold, wet energy, to your body, such as salt. Including salt in your diet can therefore make a Yin constitution vulnerable to health symptoms.

But Doesn’t Everyone Need a Little Salt?
Clients often ask this question. Actually, what everyone needs is sodium – just not in the form of salt, which is sodium chloride.
According to the American Heart Association (AHA), the minimum physiological requirement for sodium is less than 500 mg a day.

Sodium is a mineral, and is found in most fresh meats, vegetables and fruits. As a Lesser Yin constitution you will get all the sodium you need from natural food sources within your Lesser Yin nutritional guidelines.

If you are Lesser Yin and still feel that a little salt doesn’t hurt you:
This means that you haven’t yet reached the level of health transition where your body can tell the difference. You can only achieve this level by excluding all cooling foods from your diet, including salt, for 8-12- weeks. Then you and your body will be in harmony, and it can easily communicate to you what helps it and what hurts it, including how salt affects it.

Bottom Line: If it is a seasoning that tastes salty, it will hurt your Lesser Yin body.

But Food Doesn’t Taste Good Without Salt!!
Some of my Lesser Yin clients find it challenging to let go of the taste of salt.
When we crave something that is fundamentally toxic for our Body Constitution we can think of this as a type of addiction. It is also a long-standing habit, as most of us grew up eating plenty of salt.

But like any habit, it can be broken, and once you break the habit then salt will no longer appeal to you as your body restores its internal balance. This is particularly true when that habit hurts your body. After we break the habit our body will not let us go back to it, as it now resists anything that creates imbalance. Many clients have told me how they gradually developed an aversion to salt after avoiding it for some weeks.

Solution: Flavor your food with the wide range of warming spices that are available to the Lesser Yin constitution. Over the long term you will find this much more satisfying as your health improves and you experience true internal balance.

Today’s Featured Client has provided us with a delicious Lesser Yin recipe that is a wonderful example of how good food can taste, even without salt.

When, as a young man, I first landed on the steps of the Sixth Ancestor Zen Center in Berkeley, California,  I was suffering from chronic, extreme anxiety, digestive problems, IBS and dizziness.

I was met by Jaguang who introduced me to the Five Element Sasang body constitution nutritional system. Twenty years later, I have finally arrived at the level of healing that resulted in all my lifelong symptoms significantly subsiding or disappearing. I never imagined that I would see the day when, for the first time since my childhood, I would be symptom free.

Being of the Lesser Yin constitution I was always overweight as far as I can remember, due to my sluggish energy circulation. My initial one-dimensional approach to the Body Landscape system just looked at herbs and diet. With time, I came to realize that I needed regular upper body exercise with cardio to promote my energy circulation. In addition I had to make sure that I got my full quota of sleep. I used to be down with the flu two or three times a year. Taking a Lesser Yin Chinese herbal treatment formulated for me by Master Sunim, on a regular basis, has eliminated my down time.

I sabotaged myself for a long time due to the notion that a little bit of a bad thing is not going to hurt you. Based on my Lesser Yin body character and absolute lack of fire in my energy configuration, I was advised to stay clear of salt as it was a cooling food. Little did I realize that salt was a silent, invisible enemy in my food that was playing havoc with my system and frequently spiking my anxiety and panic attacks. It was only when I started to cook each one of my meals without salt or other cooling foods, that I started to truly experience the benefits of the body constitution diet .

Another mistake I made was to second-guess the Lesser Yin diet by sometimes dabbling with popular low carb diets. At first I was encouraged by the significant loss of weight through ketosis. However, in the long run these diets were unsustainable with undesirable side effects and my weight eventually returned. I understood from Jaguang that ideally one needed at least five varieties of food in each meal  which may include grains, beans, legumes, vegetables, dairy , fruits, meats, healthy fats and oils. The food also had to be tasty and fulfilling. I learned to eat a controlled portion of carbohydrates to control my weight.

For the past several years I had suffered from severe pain in my lower legs and heels, and edema in my ankles. After carefully analyzing my diet, Jaguang recently advised me against using coconut oil, and instead switch to peanut oil. Coconut oil was inadvertently strengthening my already strong lung energy, thereby breaking the energy flow leading to problems in the lower extremities.

Within a short time my feet began to rapidly heal, and  I was recently able to jog again after all these years. Who could have guessed that just changing oils could make such a big difference in my health? I learned the hard way that it was not just about nourishing my weak organs but also about not further strengthening my strong ones.

I wish that I had worked as frequently with Jaguang earlier in my journey as I have done in the last few years. It could have shaved off years of suffering. I am forever grateful to the Body Landscape nutritional system in setting me on the true path to my healing.

This is a Spicy Ginger Chicken recipe that is commonly used in South Indian Villages. I have eliminated the cooling components like salt and coriander powder to make it more Lesser Yin Friendly.

Ingredients
1. Chicken ( About 500 grams or half a chicken cutup ) – I typically use skin and bones in my recipe as they add flavor  to  dish. But you can substitute with Chicken breast.
2.Spices – Found at your local Indian store if not available at a supermarket. Google  “Indian grocery store” to locate one closest to you.
Bay Leaf –1
Cinnamon – A small piece
Blackstone flower: 1 or 2 (commonly available at the Indian store) I have attached a photo below.

Star anise – 1 piece only
Red chilli powder –start with ½ to 1 Tsp and see how spicy you prefer.
Turmeric – ¼ tsp
Caradmom – 2 pods
Cloves – 1-2 pods maximum. More can be too overpowering.
Fennel Seeds – ½ to 1tsp
Cummin Seeds – ½ to 1tsp
Ginger – 1 medium piece
Peanut Oil
Yoghurt -2-3  Tbsp
Red onion – 1 Large or even Medium
Curry leaves – 1 or two branchs from the packet.  Strip the leaves from the branch and add them Do not add the branch or the stem. Available in packets in all Indian stores. Very fragrant and a must for this dish.
Green chilly – One or two – I would use the Thai variety or pick up the potent ones from the Indian store.
Ginger/ Garlic paste – You can make these by grinding ginger and garlic in a mixer either together or separately .- 1  to 1 1/2 tsp
Tomato – 1 small

Steps
1. Cut ginger into Julienne strips and fry them in oil. I use peanut oil  (cold pressed not refined- available in Indian store ). Set aside.
2. Marinate the chicken in goat or cow yoghurt for about 15 – 20 minutes.
3. Grind in a mixer: cardamom, Fennel and  cumin seeds and set aside.
4. Grind in a mixer: bay leaf, cinnamon , black stone flower, cardamom, cloves, Fennel , Cumin seeds, star anise.
5. Slice onion into small pieces
6. Add oil to a non-stick  cooking pot
7. When the oil is hot add the spice mixture from step no.4  and let if fry for a minute on medium flame  until the raw smell of the spices disappears.
8. Add the onion to the mix followed by the curry leaves. Fry till the onion starts to develop a brownish color.

9. After a few seconds add green chill to the mix
10. Now add the turmeric powder along with ginger/ garlic paste
11. Add mix in step no.3 to the cooking pot . At this point your cooking pot will look like the photo shown here. Stir for a while until the raw smell of spices disappear.
12. Add the marinated chicken from step no.2  and stir well.
13. At this point you can add  ½ cup of water or leave it as it is. I am very careful about adding water to dishes as there is no salt in the dish and too much water can ruin the dish giving it a watery diluted taste.
14. Cover and cook for about 15 –  20  minutes,  making sure that you stir along the way .
15.   When you see that the chicken is nearly cooked  you can add the tomato . I usually add tomato after the chicken has nearly cooked as sometimes the chicken can harden from adding the tomato.
16. Cover and cook for another 15 minutes on low flame .  You may need to lower the flame to prevent the chicken from burning.  Rather than use precise cooking  times, I usually judge by looking at how the dish is evolving.
17. At some point you will see the oil come out and float on the top of the curry with a reddish hue and your chicken is well coated. This is the indication that your chicken is ready .
18. Sprinkle the ginger julienne from step no.1 on to the dish to finish it.
The secret to this recipe lies in balancing the spices. Too much leaves it with an overpowering taste. Too little leaves it bland.
The long strips  you see in the photo are the fried ginger julienne. The green leaves are the curry leaves we added during cooking.
Serve over rice.
Enjoy!

About the Author: Jaguang Sunim